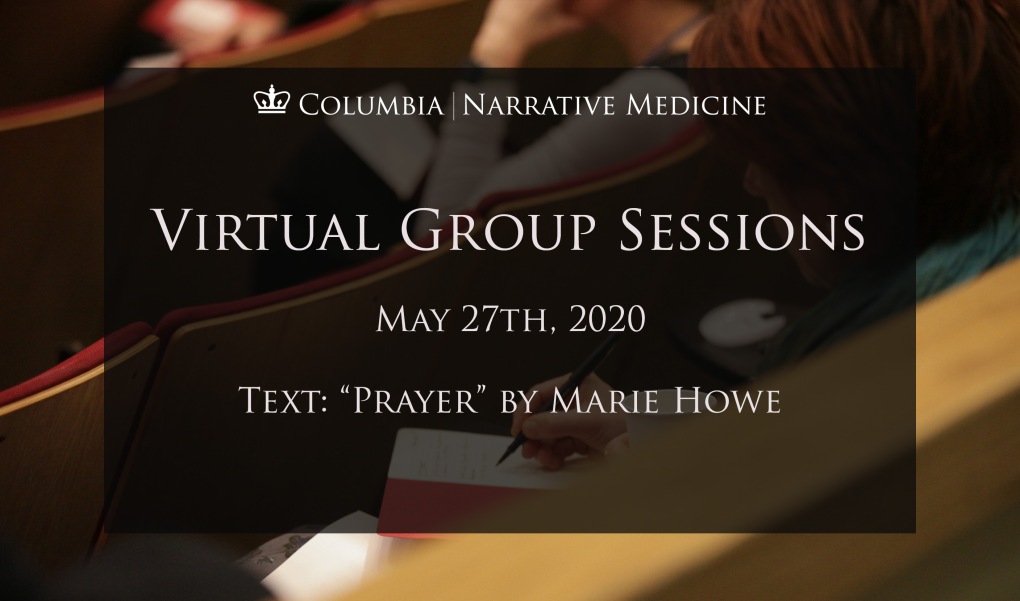 We welcomed a wonderful group of 38 participants from places including the American college towns of Palo Alto, Austin, Iowa City, Villanova and Hanover and world capitals like London, Montreal and Paris, not to mention Atlanta, Bahrain and Elsah, Missouri.

Our text today was the poem “Prayer,” by Marie Howe, posted below. We entered by asking “Whom is the ‘I’ addressing?” Participants suggested the “you” might be a parent, a higher being, or even the narrator addressing herself.  As we shared our diverse ideas, one participant remarked that the poem kept changing colors. The title of the poem and the psalm-like use of couplets suggested that the “you” might be a spiritual god. Two readers compared the line “you are as close as my own breath,” to a Koran passage that addresses God as “closer than the jugular vein.”  Another participant imagined the “you” to be a writer’s muse and noted that the narrator’s struggle resembles a writer’s struggle with the creative process. We also thought about the often-expressed regret for things left unsaid and heard the “you” as someone who had died. Reflecting on the possibility that the narrator was actually addressing herself, we remarked that she seems to have mulled over these feelings many times before. We explored how the physical items like luggage linked to the trucks carrying garbage, which had a sonic resonance as well. Some people detected humor in the ending and sarcasm in the characterization of beauty products as “something more important”  than “you.” Several readers enjoyed the juxtaposition of the sacred with profane, the transcendent with the everyday.

Our prompt was: Write a story you forgot to tell. One response described moving a parent to a healthcare facility and led us through a series of factual statements. This created a sense of suspense that contrasted with the vulnerability we felt when the piece ended with a question, “Is this how it is written?” We also noticed how, although the piece was written in the present tense, it very much had a sense of past and future, echoing the Howe poem. Another piece described a young person’s interest in Jungian philosophy, and we felt the universality of dreaming of the future, as well as the humor the narrator showed while looking back at a past self. The final writing used the metaphors of music to describe the sensation of living with a “free-styling” illness. Weaving together ideas like rap and a symphony, the writer composed a sensory-filled piece that seemed to echo the aesthetic of the experience.

Please join us for our next session Friday, May 29th at 7pm EDT, with more times listed on our Live Virtual Group Sessions page.

Every day I want to speak with you. And every day something more important
calls for my attention—the drugstore, the beauty products, the luggage

I need to buy for the trip.
Even now I can hardly sit here

among the falling piles of paper and clothing, the garbage trucks outside
already screeching and banging.

The mystics say you are as close as my own breath.
Why do I flee from you?

My days and nights pour through me like complaints
and become a story I forgot to tell.

Help me. Even as I write these words I am planning
to rise from the chair as soon as I finish this sentence.

Originally published in “The Kingdom of Ordinary Time”, Norton 2008