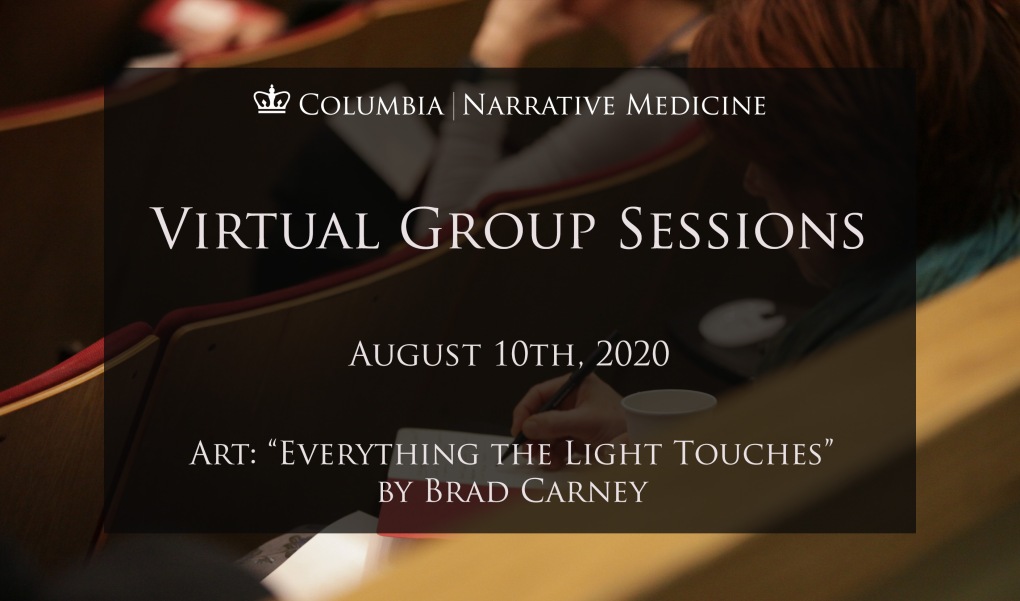 Today, we “close looked” at a new kind of text: a mural found in the city of Philadelphia titled “Everything the Light Touches,” designed by Brad Carney with The U School students, and painted with Asociacion Puertorriquenos en Marcha and the 8th and Diamond Rec Center for Mural Arts Philadelphia. After one minute of silent close looking, we shared our impressions and observations. Our first respondent brought attention to the movement in the piece by sharing some of the words that came to her in observing the painting; participants brimmed with observations of what they saw as actions of “reaching, grasping, expanding” in the postures of figures in the mural who they saw “skating, dancing, writing” as they looked for freedom and connection. Some saw women represented and thought of “sisterhood” and added the idea of “female energy” even attempts to “emancipate through writing.”

One person said, “Philly is a city of murals” and followed with a “seeing Ben Franklin.” Freedom was again mentioned, which seems fitting with what we know about the city’s early history, congresses, and the Liberty Bell. The second time it was mentioned as “Freedom into flying” and pointing to a figure that looked as if about to leave the ground.

More than one participant saw music–music floating, music “adding color”, music reaching different corners.  The mural’s narrative brought associations to Yeats’ “negative capability,” which suggests the value of living with uncertainty. (A value held by NM close-reading and slow-looking in which we explore together without illusions of “solving” or certainty in deciphering texts.)

Attention was paid to the bright colors, the “opacity” of the blue, red, pink, and green; the combination of realism, impressionism, and abstraction, and how these aspects “enliven architecture.” As one participant contributed: “There is more to an inner city than bricks and cement.” That comment took us back to an earlier visual text and our discussion of that which is “swirling in the air.” Another said the lines in the mural’s design made her think of the technique of drawing without lifting the lead from the paper, which provides continuity to the rendering.

Before prompting 4-minutes of writing, when we asked participants to “chat” possible titles for the (as yet unrevealed) title for this community mural, people suggested;

When asked to “Portray a person, place, or thing that you wish the light touched” those who read their work aloud shared odes to people (family or friends) whose lives seemed limited due to aging or other situations that writers wished light (internal or external) could shine on them. There were comments about limiting our own assumptions about who or when to shine a light on another. As we shared our thoughts, we reflected on the need to be attentive and mindful as we shine light on others – what kind of light would they prefer? whose stories are we taking up and colonizing? Participants were grateful for the new perspective this piece and each other’s writings contributed, flipping “our expectations of light being a good thing”. It also revealed how assumptions may shape what we see and hear, or what we look for.

These comments fit well with another person’s writing about turning over rocks in nature and uncovering life that preferred the dark. The writer gave voice to the lives of these “roly-polies” who asked the narrator to cover them up again and leave them in the dark.

We closed off by asking ourselves questions about the nature and the origin of light:  “Does lightness have to come from the outside?” “Or can it come from the inside?” “Or does it matter as long as we get to experience it?”

Please join us for our next session Wednesday, August 12th at 12pm EDT, with more times listed on our Live Virtual Group Sessions page.