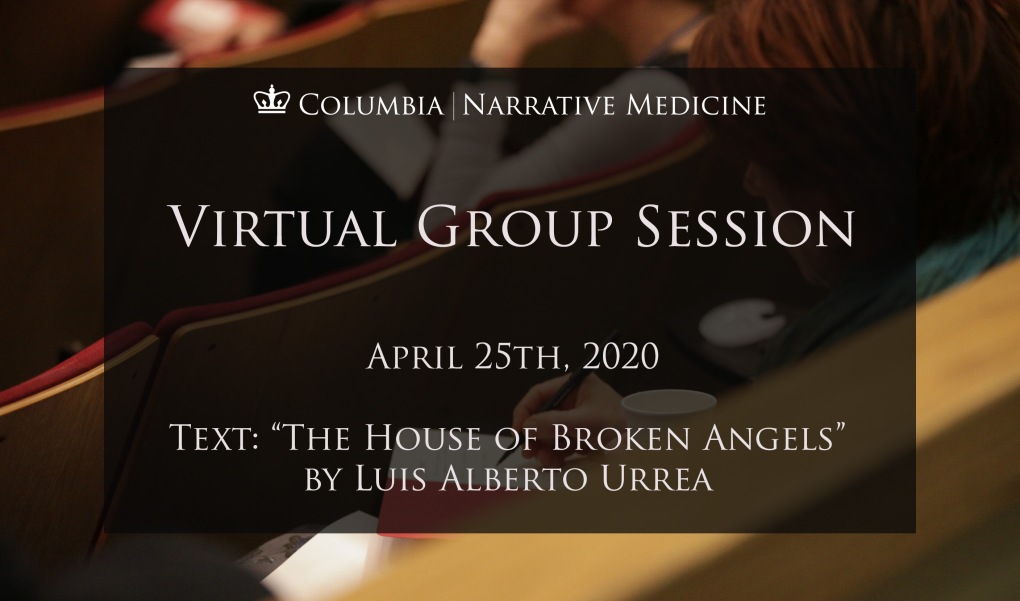 Thank you to everyone who joined us for this session! On a sunny Saturday afternoon, we had 52 participants joining from across the United States and many from overseas, including Portugal, Bahrain, Bristol, India, Canada, France, Italy, and Morocco.

Our text was an excerpt from “The House of Broken Angels,” by Luis Alberto Urrea, posted below. We read the excerpt once and discussed how language helps us assimilate and the emotional and intellectual labor involved with assimilation, how culture is an integral part of language, and the many ways that language recreates us.

Our prompt was: “Write about a time language re-created your reality.” The responses were in the shadow of the text, with many sharing their experiences of learning a new language and how difficult that could be, the places one recreates language, and even dreaming in the foreign language one is learning (Français was the predominant second language of the day). The words used were colorful and poignant and reminded us of how powerful language can be.

Please join us for our next session: Monday, April 27th at 6pm EST, with more times listed on our Live Virtual Group Sessions page.

He was temporarily out of words. He, who had taught himself English by memorizing the dictionary. Competing with his estranged father to see who learned newer, stranger, more American words. His father, once a monument of a man, later small and gray and watery-eyed, charming and brutal as ever, but whittled down. Sleeping in Big Angel’s back bedroom for a season—Big Angel ascending to patriarch. Nobody could imagine such things. No Mexicano or gringo.

No way of knowing how language re-created a family. His own children didn’t want to learn Spanish, when he had given everything to learn English. The two men at the kitchen table with cigarettes and coffee and used dictionaries. They captured new words and pinned them like butterflies of every hue. “Aardvark,” “bramble,” “challenge,” “defiance.” One called out a word: “Incompatible.” The other had to define it in less than three minutes. Five points per word. Scores tallied on three-by-five-inch index cards. At the end of each month, a carton of Pall Malls was at stake. If the caller’s accent was too hard to understand, he lost three points. And so, with verbs and nouns, they built their bridge to California.

English exams, followed by paperbacks bought at the liquor store. His favorite gringo phrase at work, which he seldom used at home, was “By golly.” He learned that a mighty lover, in James Bond books, was known as a “swordsman.” He learned from a John Whitlatch action novel that a man with a prostitute for a wife was an “easy rider.” Americans in the ’60s said “easy ice” to bartenders when ordering a cocktail, thus sounding very current and ensuring a bit more liquor in the glass. Big Angel maintained a mental data bank of American secret spells and incantations. Hard-on. Johnny Law. What can I do you for?

Why was he thinking about work? About the past? It was over. It was all over. He was never going to work again. “This second,” his father liked to tell him, “just became the past. As soon as you noticed it, it was already gone. Too bad for you, Son. It’s lost forever.”