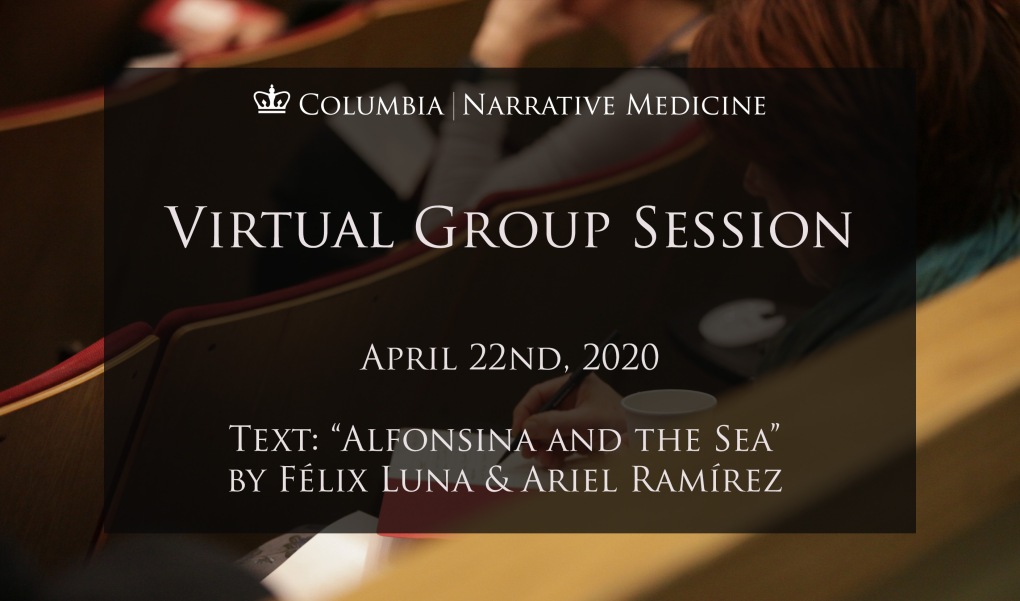 Thank you to everyone who joined us for this session! The sea was present in both text and group as several transatlantic participants joined us from Morocco, France, England, and Italy. We were glad to welcome back those who have become a source of warmth and comfort week to week.

The text we chose (posted below) was a song, “Alfonsina and the Sea” (Alfonsina y el mar), originally written in Spanish by Argentinian writer and lyricist Félix Luna, and composed by Argentinian composer Ariel Ramírez. Luna wrote the song in homage to Alfonsina Storni (1892-1938), one of the most revered poets of Latin American literature. The song echoes the influence that the sea had on Storni’s writing and life, alluding to her suicide on La Perla beach in Mar del Plata, Argentina. While this text was particularly delicate, our participants were up for the challenge; together we persevered through the poignancy of its content in both English and Spanish, calling attention to the beauty in its form, voice, and sound. Participants commented on the melodious quality of the work, where the text’s lines themselves seemed to ebb and flow like ocean waves. We concluded that the song was like a ballad, having a rhythm of an embodied performance. The switches in narrative voice, the balance between passive and active elements (what is choice vs. what is taken away), and the wavering between the absolute and the variable/the universal and the particular, were unique features that allowed us to dive all the more into the text’s depths. One participant was reminded of refugees in the Mediterranean, and noted the myriad of ways that texts can be interpreted and appropriated. We are grateful for the willingness of the group to engage with “Alfonsina and the Sea,” which explored difficult subject matter during a particularly difficult time.

Our prompt was: Write about what you are looking for… The facilitators were struck by the original ways that participants incorporated multiple languages, aquatic imagery, and senses into their writing.

Please join us for our next session: Thursday, April 23rd at 7pm EST, with more times listed on our Live Virtual Group Sessions page.