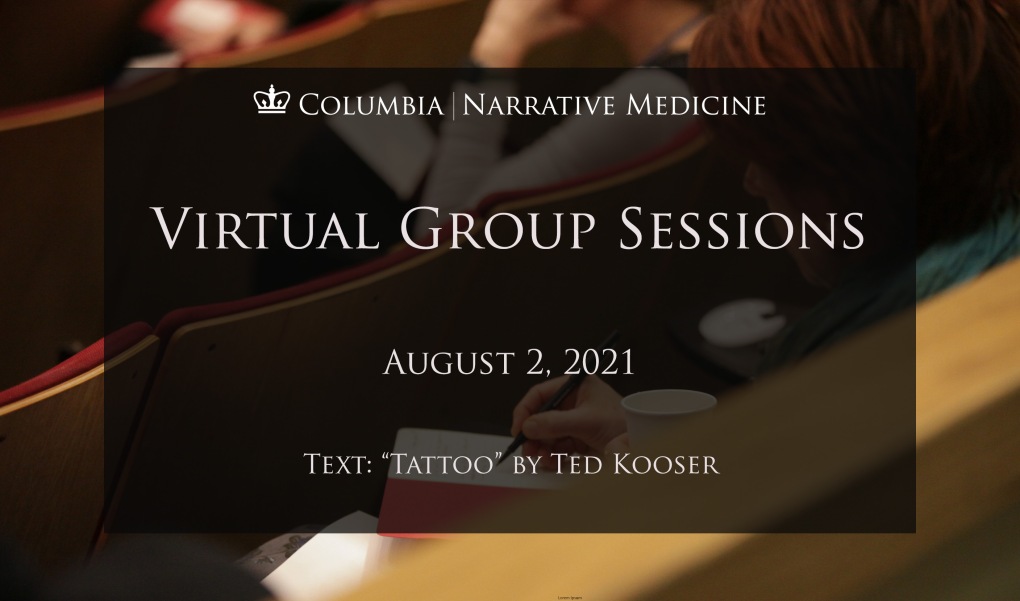 29 participants joined for our 150th VGS session in English. This was the first session for five people and the second for five more. It is always wonderful to have our core group and new participants mix! After reviewing the technical aspects of participating via Zoom and our shared values of confidentiality and approaching texts with narrative humility, we listened to two readers voice poet laureate (2013) Ted Kooser’s “Tattoo,” posted below.

We were immediately struck by the lines “where vanity once punched him hard” and “the sleeves of his tight black T-shirt rolled up to show who he was” – prompting us to think about the ways we present ourselves. In the case of the man described by the narrator: Who was he andwho is he now? What may have changed internally as well as externally? What has stayed the same? We considered the man’s choice of T-shirt and the gesture attributed to him–that of rolling his shirt sleeve and exposing the daggered heart–before going to the yard sale. A man still expressing himself in the theatre of the body. “Life has happened,” offered one participant, who noted not only the “bony shoulder” but also the “shuddering heart” calling our attention to aging and to the housing of fears now or then.

We had fun imagining various narrative viewpoints. Was the narrator a young man observing an older man while denying that his body would age and grow softer like the man he observed? Or was the narrator a woman drawn to the description of a one-time “stallion” wearing his tight T-shirt with bravado? Was the observer another older man who had known, or not known, the man in younger days? And what were the author’s, the narrator’s, and our own identifications with//projections onto the character portrayed?

After writing 4 minutes to the prompt “Draw or describe the shoulder tattoo” we heard 3 writers read aloud.

The first combined a physical/clinical description of a physically “depleted” human heart  with a verso to the heart as a holder of emotion and its metaphorical demise from “the excesses” of too many tears. One person was reminded of “The Chart” by Dr. Rafael Campo–to which the writer signaled that Campo’s work had served as inspiration for tonight’s prompted writing.

We listened to another piece, which began with a reference to a “glow” of iodine painted on the skin before surgery and an imposed and lasting “bruising.” Participants were quick to hear the echoing of this writing with “The Tattoo” and to see in our minds’ eye the image of marks created with words.

The third piece began with an image of the tattoo “dancing” and “flexing” on the shoulder and concluded with impressions of the man’s spirit very much alive.

These shared writings, like the text by Kooser, elicited many thoughts and responses, which were shared both orally and via the chat. These included attention to tattoos as forms of “what our skin tells” and how tattoos, at one time were “markers of gender and class” and now are much more prevalent. The color “blue” evoked the possible use of the word to convey physical “heart failure” and de-oxygenation of blood and/or “a failed heart.” One comment suggested that we are “human billboards” and asked if the “daggered heart” represents not a warning or a murder but lost love.

Near the end of another session-that, in a way, are endless sessions of meaningful exchanges-a participant dropped into the chat, “Are we bodies that have souls or souls that have bodies?”

Please join us for our next session Friday August 6th at 12pm EDT, with more times listed on our Live Virtual Group Sessions page.