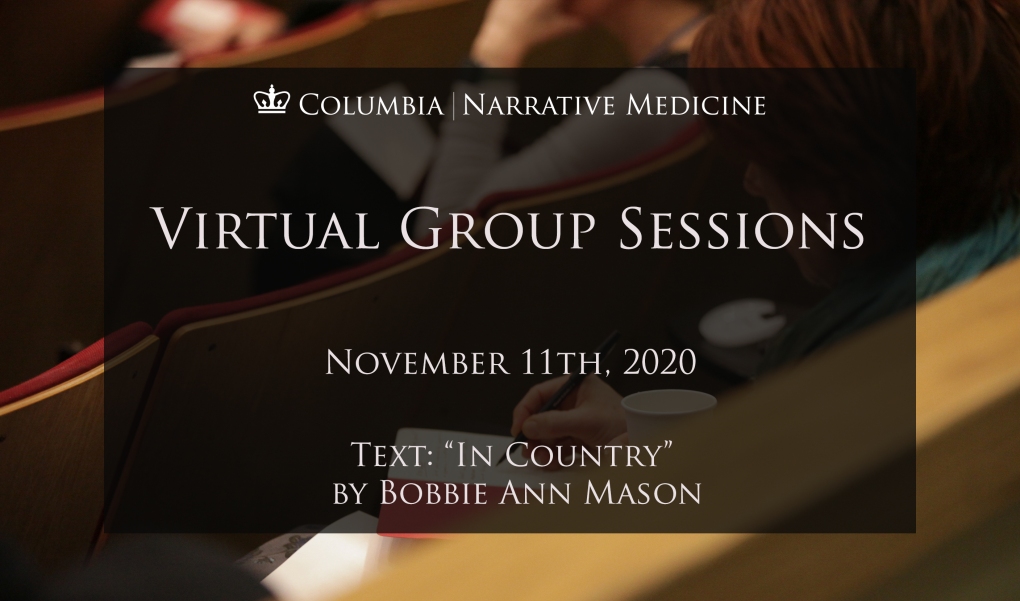 We welcomed 21 participants to our session today. Many had attended four or more times and there were three newcomers. Our text was an excerpt from the novel “In Country” by Bobbie Ann Mason, chosen in honor of Veteran’s Day.

Discussion began with consideration of who we found present in this short paragraph of writing – the narrator (Sam), all the many people mentioned and the Moon. There was a connection made to the photograph of a young soldier being both present and missing. It was mentioned that photographs never change but that Sam imagines what this young soldier, her father Dwayne, might be thinking, what questions he might ask or what he might feel, as she seeks a connection. There was also recognition of a political construct that built temporality through a plotting of events that had occurred and that her father had missed – the Moon landing, Watergate and Nixon’s resignation. These cultural markers have impacted the family and as Sam speaks of her grandfather, father, and brother the participants noted that these male authority figures create the history that dominates Sam’s thoughts. However we get the idea that she is ready and capable of making HERSTORY in response. The passage ends with what one person reflected as a gesture of affection: Sam sets Sgt Pepper’s Lonely Hearts Band on to play and says to the photograph, “You missed this too.”

The prompt (“Write about what’s missing”) inspired Interpretations ranging from missing people, missing caring, and missing mindfulness. In the shadow of the father/daughter relationship in today’s text, one writer described a caregiver/caregiving dynamic that was marked by a sense of strength (“Even if he was just being strong for me”) and vulnerability (“Once he gripped my hand in the hospital”). Direct quotes of the paternal influence (“Don’t get hysterical”) effectively brought us into the moment. Another writer’s piece centered us in the current political climate and declared “What’s missing is compassion” and asked, “Without listening, what can we expect to hear?” before affirming “You are within me, I am within you.” One more writer (“Queen of grief’) brought us to “the cusp of the time of your leaving” and although the narrator did “all the right things,” the weight of loss and the sad/angry grieving process was substantial. Although each piece of creative reflective writing differed in form, voice and content, the theme of legacy was present in all.

Please join us for our next session Monday, November 16th at 6pm EST, with more times listed on our Live Virtual Group Sessions page.

from In Country by Bobbie Ann Mason

The soldier-boy in the picture never changed. In a way that made him dependable. But he seemed so innocent.

“Astronauts have been to the moon,” she blurted out to the picture. “July 20, 1969. Armstrong, Aldrin, and Collins. Collins didn’t get to walk on the moon. He had to stay in the command module.” Her father never knew things like command module and LEM, she thought, despairing at the idea of explaining to someone the history of the world since 1966. How did teachers do it?

For probably the first time now, it occurred to Sam how amazing it was that men had walked on the moon. Her father had missed so many important events. Watergate, for instance. Sam could not remember exactly what it was about. Her history teacher, Mr. Harris, had said, “The biggies in your lifetime were the moon landing, the assassinations, Vietnam, and Watergate.” Mr. Harris said everything was downhill after Kennedy was killed. Sam could probably name all the other assassinations if she thought about it.

“You missed Watergate,” Sam said to the picture. “I was in the second grade.” She remembered Emmett absorbed in it, watching it on schedule. It was a TV series one summer. When Nixon resigned, Emmett and Irene were ecstatic, but their parents had voted for Nixon and said the country would fall apart if he was forced out. Sam wondered if that was why nobody could get jobs and the world was in such a mess. She stared at the picture, squinting her eyes, as if she expected it to come to life. But Dwayne had died with his secrets. Emmett was walking around with his. Anyone who survived Vietnam seemed to regard it as something personal and embarrassing. Granddad had said they were embarrassed that they lost the war, but Emmett said they were embarrassed that they were still alive. “I guess you’re not embarrassed,” she said to the picture. The face in the picture ruled the room, like the picture of the President on the wall of the high school auditorium. Sam set Sgt. Pepper’s Lonely Hearts Club Band on the stereo.

“You missed this too,” she said.